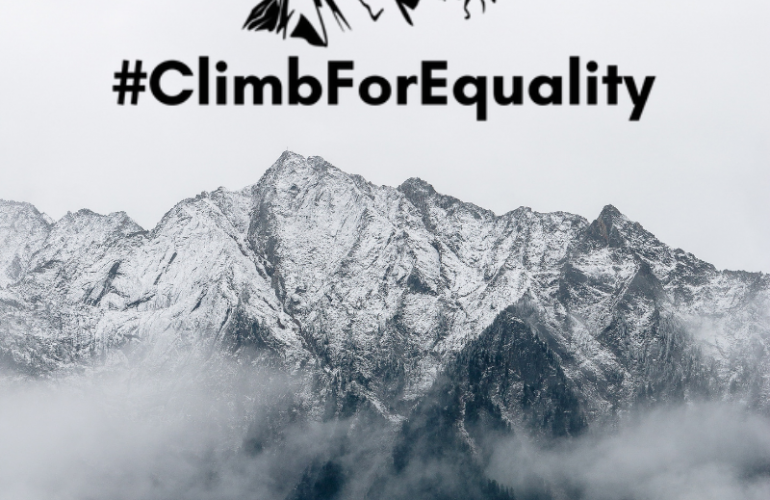 Right now, I sit here at my desk. Before I got here I fed the kids breakfast, took the dog out, fed the dog, made lunches and snacks for the kids, and got the kids off to school. Then I finally sat down at my desk to write when I read my sticky-note reminder taped to my screen. “Drink water!!!” Why do have I note to myself to drink water? Because in my daily juggle of priorities and meeting the needs of others, I need constant reminders to meet my own basic physiological needs.  Breath, eat, and drink.

At this very same moment, that is exactly what I hope Caroline Gleich, ski mountaineer, and activist is doing while on Everest expedition. Anticipation, excitement, and altitude can certainly be a distraction when it comes to remembering basic needs. It is my hope that the summit nutrition plan I put together of her is now serving as her “sticky note” reminder. She has begun her Everest expedition with fiance Rob Lea and the team from Alpenglow Expeditions.

You see, whatever our passion, be it mountain climbing the world’s tallest peaks or sitting down at our desks to write a novel, we juggle a lot just getting there. In a frenzy of nerves, excitement, hard work, and overwhelm it can be easy to overlook the basic physiological needs that sustain our ability to keep moving on towards the summit.

That is why I reached out to Caroline and created her personalized summit nutrition plan. After interviewing several mountaineers it had become clear to me that good food, water, and coffee was in abundance at base camps to support expeditions. Eating well is part of the experience and food for refueling and recovering is understood.

Consuming fuel during the moving time, however, has its challenges and is not top always top of mind when climbers expend most the energy breathing and focusing that next step. Yet, if mountaineers knew what their fueling needs actually were ahead of time and what impact under-fueling the activity may be having on them (not enough calories to reach summit!), would they be more inclined to create a plan for what the will eat, when they will eat it, and how they will carry it when in route? While Caroline might not meet her two-hundred calories per hour goal we set, my theory is she will eat more than she did in her previous expeditions simply because she is more aware of the calorie demands.

In conversation with the crew at Alpenglow Expeditions, I learned that there are four camps and moving time between those camps is variable with conditions but, could be between four and eight hour days. Climbers also carry packs that range between fifteen and thirty pounds. These are factors I considered when determining the specific energy demands put on Caroline as she would begin her ascent each day.

Here is an estimation of Caroline’s calorie needs:

CALORIE ESTIMATE DURING HOURS OF CLIMBING

Much like ultra-runners, tour de France riders, and other multi-day athletic challenges, it is nearly impossible to meet the caloric energy demands put on the body. Caroline’s nutrition object for Everest is to minimize the calorie deficit by consuming meals at camp and approximately two-hundred calories per hour of climbing. It isn’t realistic to expect her to be able to consume enough to meet her needs. Like all things, it important to look at what can be done and go from there.

To sustain her energy during the days of climbing I recommended approximately two hundred calories per hour from mixed macronutrients:

Knowing what is needed to sustain energy is only half the challenge. The other half of the fueling challenge, especially at very high altitude, is juggling the three basic physiological priorities for sustaining movement:

In an Everest climb, oxygen masks are worn above the twenty-three thousand feet. These means to eat and drink the oxygen mask needs to be removed. It isn’t uncommon to take the oxygen mask off for several minutes at a time but, it is one more barrier to surpass when making the decision to drink and eat. It is altogether too easy for the climber to skip fueling opting for less hassle, more breath, and continued moving forward. In the long climb, however, the benefits of eating small and often may outweigh any fuss over the oxygen mask.

In addition to eating and drinking with an oxygen mask, there are other challenges too:

To help her juggling shifting nutrient and oxygen priorities I offered these suggestions:

This expedition is about more than just getting to the top of Mount Everest. It is also The Climb for Equality. Did you know only 11% of summiteers over 8000m are women? The Climb for Equality advocates for more women in leadership roles and more woman on mountain adventures. As women, juggling priorities is new not knew to us. In fact, it is what motherhood trains us to do. Hilary Nelson, ski mountaineer and mother of two boys, confessed what I have also experienced,  adventuring in the mountains is easier than parenting and motherhood.

That fact is actually what sent me literally running to mountain ridge lines I previously thought were unattainable for me. We juggle a lot as parents and twelve years in parenting, I still need the same reminders Everest climbers need to make sure I have what it takes to sustain myself through the journey. Slow down, eat, breath, and drink.